While I know exactly how terrible Deadly Friend is, watching this trailer makes me anxious to rewatch this botched Wes Craven effort. Not only that, but if Scream Factory announced they were doing a special edition of it, I'd have to preorder it. Because clearly, based on what I'm seeing in this trailer, I must not have given this movie a fair shake back in the day. I've become convinced that a fresh viewing will completely change my perception of it.

Then again, maybe I'm just getting a little carried away. I've been wrong about movies before, sure, but this is Deadly Friend we're talking about. It's probably best not to forget how bad it sucked.

You'd think that there'd be no wrong way to tell the tale of a precocious teenage boy who uses his knowledge of robotics to bring his dead girlfriend (played by a pre-Buffy Kristy Swanson) back to life. But hey, as it turns out there really is a wrong way.

The only time the audience I saw this with on its opening day of October 10th, 1986, ever perked up was when the old hag played by Anne Ramsey got her head vaporized by a basketball hurled at warp speed. 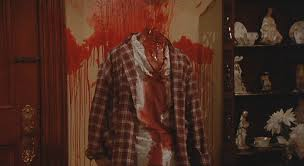 Of all the Wes Craven movies that have been remade in recent years - Last House on the Left, The Hills Have Eyes, A Nightmare on Elm Street - Deadly Friend is the one that could really benefit from being revisited but yet, for whatever reason, it doesn't seem likely to happen.

Maybe the bad experience that Craven had making this made him want to permanently turn his back on it. If so, that's too bad 'cause what this misbegotten movie really needs most of all is a friend. 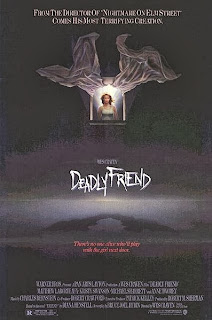