Trick or Trailers: I Know What You Did Last Summer (1997)

By the time Scream kicked off a slasher revival in 1996, I was already past the target age range for these films. Just the same, I mostly got a kick out of the post-Scream slashers. After such a long late '80s/early '90s drought for horror, it was nice to see the genre experience a resurgence in popularity.

Sure, a better trend with better films would've been preferable but, hey, whaddya gonna do? The movies I embraced as a teen looked like junk to the generation before me so it'd be wrong for me to be (too) snobbish about the next generation's horror fads.

As far as I Know What You Did Last Summer goes, I enjoyed it more than I did Scream. While I liked a lot of what Wes Craven did directorially with Scream, I never thought Kevin Williamson's screenplay was anywhere near as clever as it was credited as being.

His adaptation of Lois Duncan's novel I Know What You Did Last Summer, on the other hand, was much more straightforward and therefore on much safer ground. Also in I Know's favor was Jennifer Love Hewitt, who I thought made for a much better Scream Queen than Neve Campbell, who seemed like such a miserable pill to me.

While the outfit of the killer in the film came in for some ridicule, derided as looking like the Gorton's Fisherman, as soon as I saw it in the trailer, it brought back fond memories for me of the rain slicker worn by the hitchhiker in the Hammer House of Horror episode "The Two Faces of Evil." 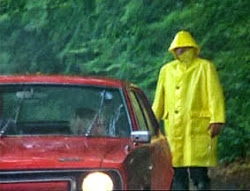 I Know What You Did Last Summer was released on October 17th, 1997, and became an instant smash hit. Sixteen years later, long enough for any uncool stigma to have passed, the films of the post-Scream slasher wave still haven't become fashionable for horror fans to embrace and if they haven't by now, I guess they never will. 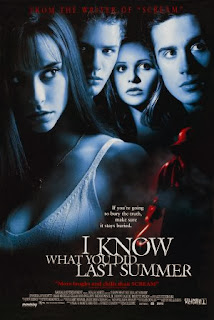 Email ThisBlogThis!Share to TwitterShare to FacebookShare to Pinterest
Labels: I Know What You Did Last Summer, Jennifer Love Hewitt, Kevin Williamson, Lois Duncan, Trick Or Trailers

I pretty much avoided this one... but that trailer ain't have bad and kinda makes me want to see it. I'm a sucker for any horror set near the ocean... which this one seems to be.