As much as I love teen slashers, my hopes always get up a little higher for a horror movie when I see a trailer that features real adults in it. Seeing Virginia Madsen (as well as Kasi Lemmons, who had been Jodie Foster's fellow FBI agent in The Silence of the Lambs just the year before) in the Candyman trailer had me feeling early on that this was going to be a horror movie with something more to it. It was a rare treat in '92 to see a horror film centered on grown-ups - just as it is today.

Even though this was an adaptation of Clive Barker's short story "The Forbidden", this trailer makes no mention of that. When something is based on anything by Stephen King, even if it's just a novella or short story, the marketing makes sure everyone knows it.

Then again, in 1992 advertising a film as a Barker adaptation was anything but a safe bet. Barker himself had done the only decent one to date - 1987's Hellraiser - and everything else had been much, much less impressive. Candyman, though, did things right.

Director Bernard Rose had done the outstanding dark fantasy Paperhouse (1988) prior to this, a film described as "the thinking man's Nightmare on Elm Street" and Candyman was similarly smart and scary.

Released in the US on October 16th, 1992, Candyman became a sleeper hit. Despite that, and despite the fact that it even spawned a couple of sequels, I get the feeling it's become a little overlooked these days. If you bring it up, everyone agrees for the most part that it was great, arguably a classic even. But it seems to be one of those movies that isn't that celebrated today. Last year was its twentieth anniversary and I don't recall anything in the horror press about it and there's been no special edition DVDs as far as I know.

Things remain strangely quiet on the Candyman front for some reason. Why is that? I don't know. Maybe the movie was just so effective, people still think they're better off just not saying his name. Or, more likely, they're just worried that talking about it too much will result in some studio executive getting the bright idea to remake it. 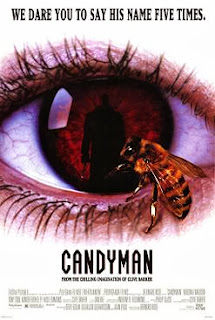