Whether you like the Saw films or not, there's no arguing that the Saw series has earned its place in horror history. Over seven films, it became the first major horror franchise of the new millennium.

Honestly, they never did much for me - although I give credit to 2006's Saw III for actually making me feel physically ill at a horror movie for the first time in forever and 2009's Saw VI for weaving an intriguingly topical health insurance angle into the Jigsaw saga. Then there's 2010's Saw 3D, which gave the series a big 3D send off.

Saw 3D definitely had the coolest trailer for any of the Saws, pouring on some extra cheese in order to exploit the 3D. I didn't love it as much as the trailer for the My Bloody Valentine remake...

Even though it was only three years ago, the content of Saw 3D has pretty much passed from my memory. Still love the trailer, though! 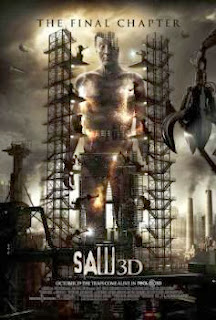