Dr. Giggles, Brainscan, The Horror Show...if it's a one and done, would-be horror franchise, I'm all over it and Bones is a four-star candidate for that list. They must make these movies just for me because they sure don't make 'em to make money.

Consider the source but I have to tell you that Bones actually is better than a movie trying to launch Snoop Dogg as the next Freddy Krueger has any right to be. In fact, you can call me a fan. Surprise!

Prior to Bones, director Ernest Dickerson had already showed his affinity for action and horror with Surviving the Game (1994) and Tales from the Crypt: Demon Knight (1995) and his work on Bones shows that he was out to make a legit horror yarn, rather than a kitschy, camp sort of thing as the trailer might lead you to expect.

Yeah, of course it has its share of one-liners but it's no send-up.

As much as I got a kick out of Snoop's horror debut, before it even opened I figured it would never spawn a sequel. Not something anyone would need a crystal ball to predict but to phrase it in cheesy horror villain speak, let me just say I felt it in my bones. 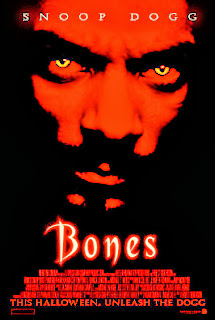