John Grisham meets William Peter Blatty in this mash-up of legal drama and satanic thriller. Based on the 1990 novel by Andrew Neiderman (who became the ghost writer for Flowers in the Attic author V.C. Andrews after her death), this was a A-class Hollywood production all the way, with Keanu Reeves being one of the biggest stars in the world at the time and Al Pacino still both respected as one of the all-time greats as well as still being a box office draw. With these two, you knew this wouldn't be some hacky production.

Not that it isn't a little cheesy, of course. It's obvious from the trailer that Pacino's performance is going to be gloriously over the top but, really, you wouldn't want him to approach it any other way and, under the direction of Taylor Hackford (responsible for one of the better Stephen King adaptations, 1995's Dolores Claiborne), Pacino's hamminess is integrated seamlessly into the overall serious tone.

Having grown up on the likes of The Omen, The Exorcist, and The Shining, I always appreciate it when Hollywood puts big money and talent into the genre.

I'm all for down and dirty independents but I dig it when Hollywood does something with horror that couldn't have been done (or not done as well) on the cheap. Sometimes it doesn't work out and you get tepid turkeys like 1981's Ghost Story but sometimes, as in the case of Devil's Advocate, you end up with a decent movie - one that couldn't have been made without the deep pockets and resources of a major studio.

Released on October 17th, 1997, Devil's Advocate was a solid Halloween hit. I haven't seen it since its release but I remember liking it quite a bit. Watching the trailer now makes me think less about what a new version of this movie would look like and more about whether anyone will ever think to turn this into a TV show.

With supernatural TV getting bigger all the time and legal dramas still popular, this is a natural premise for TV. Some TV exec should advocate for that, if you ask me. 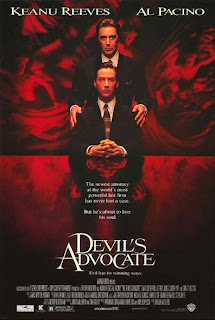