Trick or Trailers: The People Under The Stairs (1991)

At the time The People Under the Stairs came out, it seemed as though the general mood towards Wes Craven among horror fans was one of wishing he'd get back to making the kinds of movies he first made his name on - raw, visceral stuff like Last House on the Left and The Hills Have Eyes. As time has gone on, though, his post-Elm Street, pre-Scream era has found more appreciation.

These are the Craven films I'm personally most fond of and this is the time and the style of moviemaking I wish Craven could get back to: when he was mainstream and more polished but was still quirky and subversive. Granted, he did try to get back to that with My Soul To Take (2010) but sadly things didn't come together so well there.

From the trailer, The People Under the Stairs looked as though it might mark a return to Craven's earlier brand of hardcore horror. In actuality, though, it was more satirical than scary. From the start of his career, Craven has dealt in social commentary but never as overtly as he did in The People Under the Stairs. Craven tapped into something in the air in regards to simmering tensions involving class and race and, perhaps attesting to that, five months after the film was released, the Rodney King verdict sparked the LA riots.

Most audiences who saw the film on Halloween weekend back in 1991, however (Halloween was on a Thursday that year and the movie was released on Friday, November 1st), were just looking for a good scary movie rather than a statement on race in America.

It was no more than a base hit on that first count but today the issues this movie deals with (racism, greed, urban misery) are as timely than ever. It's not 1991 anymore but twenty two years later, rich racist sickos are still making life miserable for the poor. 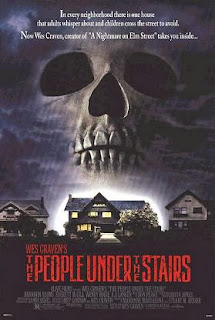 It is a weirdly creepy movie, but not really a scary movie, per se. Definitely not as scary as the title would lead you to believe.

No, and I think that accounts for the so-so response it initially received. It holds up well, though.