Man, back in the day Stephen King adaptations were everywhere. You couldn't go for too long without seeing a trailer like this that promised "the new horror from the mind of Stephen King." Whether they were good or bad (usually bad), King-based films just kept coming through the '80s and into the '90s. Eventually they tapered off - mostly due to middling box office performers like Graveyard Shift. Now it's a much more rare occasion to see King's work come to the screen. On the upside, the quality's better. Whatever their faults may be, I'll gladly take the likes of The Mist (2007) or 1408 (2007) over Children of the Corn (1984) or Silver Bullet (1985). Actually, I kind of have to take that back somewhat. I love Silver Bullet and wouldn't trade it for much - even for a better movie, which doesn't make much sense, I know, but that's me all over.

Anyhow, this Graveyard Shift trailer really brings me back to a simpler time. It's Stephen King, it's Halloween, no need to overthink things. Sadly, being released right before Halloween, on October 26th, 1990, didn't cause a stampede at the box office. But it did well enough and, hey, it's a movie about a giant rat, so the number of people who are going to look at this trailer and think "Whooo!!", like I would, are really small. Speaking of the giant rat, something that this trailer makes me instantly nostalgic for is the days of pre-CGI creatures. In 1990, the CGI era was in its infancy so if a movie featured a giant rat, it actually had to be an animatronic thing or a puppet, or both. And preferably covered in lots of slime, of course. That's the worst thing about CGI monsters. They can't be covered in slime and without that glistening coating of gunk, whaddya got?

Not much, if you ask me. 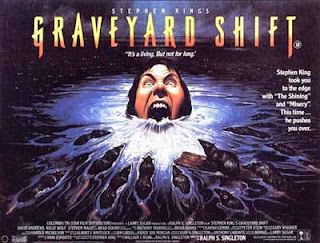 I know I saw this one... I know I didn't think much of it at the time... but that trailer totally worked on me and I'm gonna have to watch it again... if only because it brings back good memories of Prophecy's giant mutant bear.

Ha! Great call on the resemblance to PROPHECY's mutant bear. That'd never occurred to me!