So, based on the early box office returns, we know that the new Carrie didn't set the world on fire. When a horror movie has the Halloween season all to itself and most horror fans still can't be bothered to show up for it, you know you've got a true dud on your hands.

On October 11th, 1985, a livelier Stephen King adaptation was released - the Dino DeLaurentiis-produced Silver Bullet, adapted from the novella Cycle of the Werewolf. 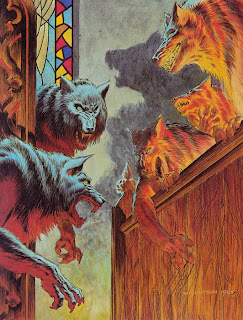 While the big appeal of the novella had been the illustrations of artist Berni Wrightson (above), the movie didn't evoke Wrightson's work at all. If anything, Silver Bullet looks a bit chintzy - a typical mid-'80s, mid-budget horror picture.

Of course, that works in its favor now as a typical mid-'80s, mid-budget horror picture can be a sight for sore eyes in 2013. The cast is good, too, with Corey Haim, Gary Busey, Everett McGill, Terry O'Quinn and Lawrence Tierney all giving Silver Bullet a considerable boost. 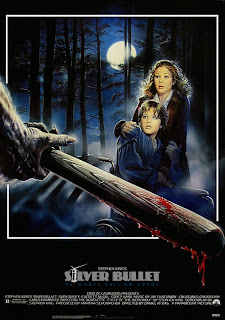 I always thought of myself as both a big Silver Bullet fan as well as a big Don Coscarelli fan but somehow I remained oblivious until now about the fact that the Phantasm mastermind had been involved in Silver Bullet as a director, to the point of filming the non-werewolf scenes before he quit over issues with the werewolf suit and being replaced by Daniel Attias. This blows my mind - both the fact that it happened and the fact that it took me this long to find out about it. It definitely goes a long way towards explaining why Silver Bullet is kind of good without being all the way good.

Too bad Coscarelli couldn't stick around and see the movie through. If he had, I bet Silver Bullet would've been a lot closer to pure gold. 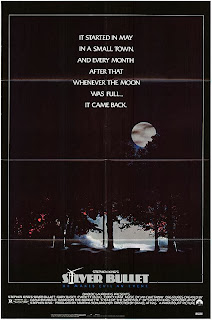