It's funny to look at this trailer and remember a time when sequels were still a novelty. Now they're so common but in the early '80s, it was actually something of a surprise when slasher sequels started to arrive because as far as horror goes, sequels were usually reserved for the likes of blockbusters like Jaws, The Omen or The Exorcist.

I hadn't seen the original Halloween by the time II came out but I remember being excited that they made another one as it just seemed like a big deal - and the trailers and TV spots successfully terrified me.

Somehow I had missed seeing much in the way of promotion for Halloween when it was first released. My only exposure to the marketing to that film was through posters and newspaper ads. Really, what creeped me out the most to do with Halloween was the cover of the novelization. 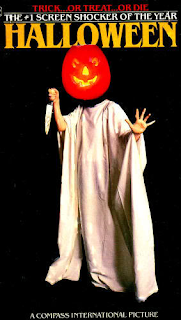 But when Halloween II came out, maybe because it was a heavily hyped major studio release, it was impossible to avoid previews. As a kid, it was the shot of Michael Myers walking down the stairs that really stuck with me for some reason.

The low angle, the way the mask looked, it all just freaked me out.

In some ways, they screwed up Michael's mask in this movie; they just weren't able to recreate the original look but I still like what they came up with. Michael's mask has changed much throughout the course of the Halloween films but I'd rank this look just behind the original's.

Most would say the same about the movie itself but personally I don't think it's the next best Halloween. If anything, I hold something of a grudge against it as I feel like it started the franchise on the road to ruin by making Michael into Laurie's brother and then introducing all the Samhain nonsense. Those developments opened the door to all the ways the series would continue to go wrong.

The ads for Halloween II promised "More Of The Night He Came Home" but as much as I've enjoyed many of the Halloween entries, I think this movie proved that, in the end, sometimes less is more. 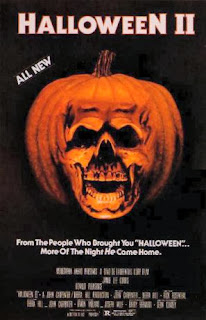 Agree with a lot of what you said. It is a great movie, I love it as a follow up to the original, but I wonder what would have happened had they not adding the relationship between Michael and Laurie, or the Samhain stuff. Imagine if he had just kept on his mindless mission to kill her just because she went up to his door that morning? Oh well. We'll never know.

Yes, maybe in some alternate timeline a entirely different version of the Halloween series exists. The one we're stuck with isn't all bad but one has to wonder what might've been.