Back in the '90s, it was still a given that any new John Carpenter film would open in theaters. No question. Even though he hadn't had a hit in a while, whenever a new movie from him would arrive, there was hope that this would be his "comeback" and Vampires kind of fit the bill in that regard. Released on October 30th, 1998, it opened at #1 at the box office. By its second week, though, it had dropped considerably with the Halloween weekend that had boosted its profile now past and with it getting poor word of mouth due to the fact that it was more of a western than a horror film.

For me, though, this remains one of my favorite Carpenter efforts. Late-era Carpenter has been enjoying a renewed appreciation over the past few years and among that bunch, Vampires definitely rates a more favorable reputation.

James Woods' performance as misogynistic, misanthropic, homophobic and all-together ill-tempered vampire hunter Jack Crow has received criticism for going too far even for a John Carpenter anti-hero, a character that some find abrasive to the point of offensiveness. While it's true that he's way over-the-top, I enjoy Woods' comically surly, doggedly anti-PC approach and I like the chemistry he has with the much more laconic Daniel Baldwin.

As a fan who (somewhat greedily) wishes that Carpenter was still active (well, a little more active, at least) and still getting his films into theaters, it bums me out that we live in a world where we're not likely to ever see another new Carpenter film on the big screen again. At this point it seems like his career has, for the most part, run its course. It might seem unfair to those of us who'd like to see more from him but from interviews, Carpenter seems perfectly content these days and as any undead bloodsucker would be quick to point out, everyone's time in the sun has to end sooner or later.

The legacy of a great body of work, though, is eternal. 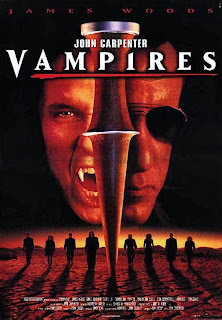