I've never been much of a video game guy. While I spent a fair amount of time (and a fair amount of quarters) in arcades as a kid, I've never owned a home system and while I'm dazzled by what I see of modern games, I just don't have the time or money to spend on another hobby. That said, I do have a fondness for movie based on video games. They're seldom good, I know, but that's never been a deterrent for me. I may be ignorant towards video games but I have a very developed palate for bad movies.

Doom, released on October 21st, 2005, followed a group of space marines forced to contend with genetic mutants run wild in a Mars-based research facility. Why they went with that when the game involves an invasion from Hell, I don't know as an invasion from Hell sounds a whole lot cooler and scarier than a viral outbreak but, you know, making movies isn't an exact science. It's all in the execution and the execution here, from director Andrzej Bartkowiak, was just lacking.

My main reason to have hope for Doom was that it centered on a squad of badasses. Anytime that happens, I always hope we'll get something as great as Predator but this wasn't it. Getting The Rock to head things up was a great idea but the movie did not serve him (or future Judge Dredd Karl Urban) well. Not only was Doom not the next Resident Evil, it wasn't even the next Mortal Kombat. On the upside, at least it wasn't a Double Dragon-sized embarrassment.

In 2005, the Halloween season hadn't been officially claimed by the Saw series yet so there was still room for something else to be the go-to Halloween attraction that year. Even though sci-fi isn't a great match with Halloween, in my eyes, I still would've wanted something to stop short the ascension of Saw. But nothing did and once Saw II decimated all other comers when it was released on October 28th, my hopes for a Saw-free Halloween for many years to come were instantly doomed. 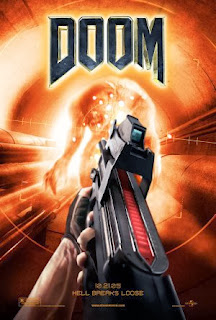