Released on October 25th, 2002, Ghost Ship marked Dark Castle's final cruise into Halloween waters. After scoring big at Halloween with 1999's House on Haunted Hill and again in 2001 with Thirteen Ghosts, Ghost Ship was another attempt to make a box office killing in October. Even though it didn't perform quite as well as DC's previous films, it still did ok but for some reason, the Dark Castle logo was never seen on the big screen at Halloween again.

Dark Castle made some good pics after Ghost Ship (ones that I liked, at least), like the underrated House of Wax, the enjoyably daffy Gothika, and the cult favorite Orphan, but after Ghost Ship, regular DC distributor Warner Bros. relinquished that Halloween turf to the likes of Saw, instead going for dates in the spring or late fall/early winter.

Too bad, as DC's brand of semi-schlocky horror was ideally suited for Halloween viewing. Much more so to my eyes than the Saw series, which never struck me as "Halloween-ish" enough. Clearly the vast majority of the movie-going world didn't share that opinion, which is fine, but, you know, I just think Halloween is better suited to ghosts and ghouls than to slasher-style butchery.

Even though it's been awhile, I wish that Dark Castle would get another crack at Halloween. You know, I think they'd have a chance going head to head with the likes of the Paranormal Activity films but at this point, I think that particular ship has sailed for good. 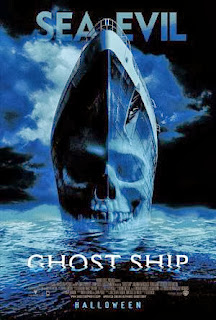 Yeah, I wish they could have stuck with it longer. Even though I feel the endings of House/Ghosts/Ship are weak in very similar ways (Casper-like friendly ghosts) I'd welcome their particular brand of ghoulish fun.
If Saw is what ran them out of Halloweentown then all the more reason for me to despise what I already have a low opinion of.

It probably didn't exactly run them out of town, per se, but once Saw became a real juggernaut, I bet it seemed sensible to avoid head to head competition.