1983 was a banner year for Stephen King adaptations, a year that saw the release of Lewis Teague's Cujo, John Carpenter's Christine, and David Cronenberg's The Dead Zone (kind of hard to believe all these films are celebrating their thirtieth anniversary this year, isn't it?).

Cronenberg's wasn't widely known enough then to be used as a selling point for The Dead Zone so unlike the marketing for, say, Creepshow or Christine in which Romero and Carpenter's names were as prominently promoted as King's own, The Dead Zone's marketing made scant mention of Cronenberg. However, for genre fans Cronenberg's involvement was a very big selling point and this was a highly anticipated collaboration. How would Cronenberg and King's very different sensibilities would work together? As it turned out, they meshed with surprising synergy. Jeffrey Boam's screenplay did a fine job of making King's episodic narrative work within the limited confines of a feature film and the material brought out a greater warmth from Cronenberg than he had previously displayed.

The Dead Zone also brought out a previously unseen warmth from Christopher Walken. I've read that King had wanted Bill Murray to play the lead of tormented psychic John Smith and I don't know if that ever was seriously considered by the producers but while that would've been inspired casting, it's hard to imagine this film without Walken.

Released on October 21st, 1983, The Dead Zone was a modest theatrical success at best, probably somewhat hobbled by the fact that it couldn't be sold at Halloween time as a real scare fest. It garnered critical acclaim, though, and for Cronenberg fans it made it easier to see a possible filmmaking future for him beyond horror. 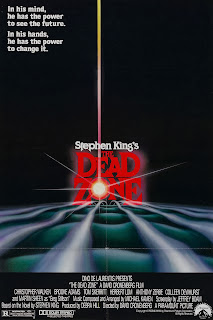