It's somewhat disconcerting to me that the year 2000 seems like such a long time ago. Looking at this trailer for Book of Shadows: Blair Witch 2, it somehow seems like even more of an ancient relic than trailers of much earlier vintage. Maybe it's the Artisan logo on the front. Seeing that, it's like "man, what happened to those guys?" They were a thing for a while and then - poof! - gone.

This trailer says it all about how little Artisan understood the phenomenon of Blair Witch in the first place. That movie was a classic case of lightning in a bottle and as soon as this trailer starts to unfold, you know that didn't happen this time around. I expect executives at Artisan really believed that if the first Blair Witch could do so well looking like (in their minds) a piece of crap, then if they made a real movie this time, with slick production values and special effects then people would literally turn out in droves.

Of course, this movie does have its fans - when you come down to it, nearly every horror movie attracts at least a minor cult following eventually - but I don't remember being too taken with it myself.

I definitely think that whatever missteps were made with BW2 proved educational to the people behind the Saw films and, even moreso, Paranormal Activity. BW2 was such a cautionary tale of how to blow a potential franchise that it set an example of what to avoid.

While The Blair Witch Project made plenty of people think twice about cavalierly walking into the woods, its sequel taught other studios and filmmakers to handle their horror franchises with care. 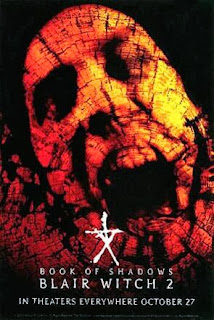 Blair Witch 2 has a brilliant conceit (not necessary novel but it's used rarely enough for the movie to seem that way) but it's cadged in such an aggressively annoying way that I'm reluctant to give it any props at all. It was an odd choice to pick Paradise Lost filmmaker Joe Berlinger to do the sequel to the faux-documentary Blair Witch but have him craft it as a straight-up horror movie but that novelty hiring doesn't really feel like a win for the viewer here. Yes, there's a point to it all and you get that little snap at the end of the picture, but I can't imagine ever wanting to actually watch this again. The best movie tricks are the ones that make you want to go back and watch the thing right away. With Blair Witch 2, it was more like "Ah, haha, yes I see what you did there. Fuck you."

I haven't watched BW2 since the theaters so my memories of it are pretty hazy. I recall mostly just being exasperated by how knuckle-headed it was. Too bad Artisan didn't give Sanchez and Myrick the leeway to do their own sequel or prequel or whatever they decided on. Maybe it still wouldn't have amounted to much but it probably would've resulted in something better than Book of Shadows.

I actually am one of the few who do enjoy Book of Shadows, and mostly because it is such a departure from what was done with The Blair Witch Project. There's something inherently creepy about it despite its many issues.

If I recall correctly, the studio made a lot of "executive decisions" on the film, most of which consisted of going for an MTV music video vibe. That approach is very obvious in the final product and possibly the film's biggest weakness if you look at it in terms of a standalone movie. I've always been curious as to how different the film would have been had there been less studio interference.

Anyway, I'm pumped your rockin' out for October, Jeff! I thought you let this candle burn out for good, but it's great to have you back blogging again!

Thanks Matt - good to be back! I kind of figured I was checked out of the blogging game but here I am going full-tilt.

I'll have to give BW2 another look one of these days. I bet I'd find it interesting all these years later.