Released on October 27th, 1989, Shocker saw Wes Craven trying to stick it to New Line, who he was feuding with at the time, by creating what was hoped to be the next Freddy at a rival studio.

Even with a Halloween release to boost it, though, and a kick ass trailer to sell it, things just didn't pan out. I'm pressed for time today so I'll step aside and let Siskel & Ebert put in their two cents.

As much as they seemed confounded by horror movies, I miss those guys. 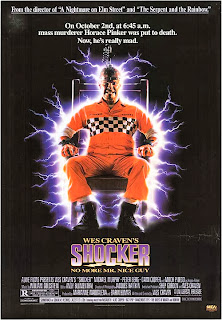 I think I have seen this film once, way back when. I need to rewatch and see just what this was all about.

I can't recall my expectation of this going in. I'm guessing I expected something more ghoulish... more spookhouse... than what I got.
Mitch Pileggi just wasn't the right sort of scary for my tastes... and the bit with the ghost girlfriend didn't help either.

Shocker is definitely an odd duck - a film with some jarring elements and shifts in tone. It's kind of a mess, really, but an endearing mess in my eyes.