Say what you will about Platinum Dunes' Texas Chainsaw remake but one thing that must be agreed on is that New Line totally sold the shit out of this movie.

When this project was announced, horror fans were apoplectic at the idea of remaking Tobe Hooper's 1974 classic. Sequels were one thing but a remake just seemed...sacrilegious. And the fact that it would be produced by Michael Bay was a further cause for concern.

One thing Michael Bay knows about, though, is making hits and whatever expertise he lent the new TCM paid off in terms of this movie's commercial appeal. Director Marcus Nispel (working with original TCM cinematographer Daniel Pearl) gave this movie a slick sheen, miles away from the raw vibe of Hooper's film and the trailer celebrated that, grabbing the attention of a new audience.

While my experience of watching TCM '03 with a very packed, amped up crowd on its opening night of October 17th, 2003, was as ideal as it gets, there was plenty to find fault with (No cannibalism in TCM? What?) and it's a movie I haven't felt the need to go back to since.

Platinum Dunes' subsequent remakes weren't any more memorable, with their 2005 revamp of The Amityville Horror probably being the best of the bunch.

Prior to this, it was assumed (at least by me) that the horror classics of the '70s were sacred ground - that they would forever stay untouched. Why I thought this, I don't know, because I grew up seeing classics of the '50s, like The Blob and The Thing, remade throughout the '80s. Somehow that seemed logical, though.

Special effects had made so many leaps since the '50s that it seemed reasonable to apply that new technology to older classics and go state of the art with them. The advantage of remaking films like Texas Chainsaw, on the other hand, seemed harder to figure.

Hard to figure or not, the TCM remake gave me and fans of my generation a rude awakening as we had to get accustomed to specifying "remake" or "original" whenever we referred to movies like TCM, Halloween, Dawn of the Dead, or The Hills Have Eyes.

And that is when I knew I had gotten old. 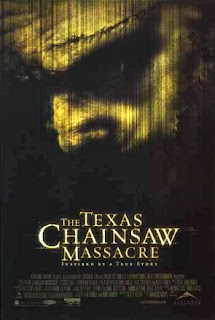 I'm still waiting for a big 3D 'reimagining' for Night Of The Lepus.

There's a lot of gold still left to mine from the '70s, clearly!

Definitely was a 'passing of the torch' moment, for fans of the old films. I still shake my head when I read some young person say "I prefer Zombie's Halloween to the original". What???

This remake of TCM was okay, for me. Nothing can compare to the grittiness of the original, so this was going to be its own thing, anyway.